(Minneapolis-St. Paul, Mn) — Oct. 18, 2022  — In a recent survey of Giftster members, 92% reported they plan to spend the same or less than they did last year on holiday shopping.

Giftster, a popular online family wish list maker service – used by over a million members – recently conducted a member survey the week of September 20, 2022 on holiday shopping spending plans for this year. 36% of the 1,872 surveyed reported they plan to spend less this holiday season. 57% plan to spend the same as last year. 7% plan on spending more than in 2021.

Company founder Ron Reimann stated, “Our members tend to be a leading indicator of trends in shopping intent because they are more organized than most and are part of families with gift-giving traditions. It looks like this shopping season will continue the annual trend of an early start but with little to no growth in expected spending compared to last year.”

Families use online wish list sharing services like giftster.com to give and get gifts that matter – and hope to spend money on gifts really needed or wanted as prices on many goods remain inflated. Online wish lists make it easier for families to stick to a shopping budget. 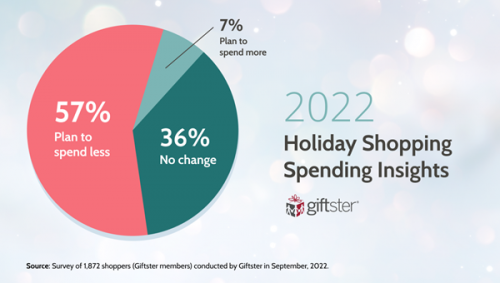 The holidays are a great source of stress and anxiety. Going overboard on spending during the upcoming holiday months often tops the list of stressors. Giftster’s mission is to reduce stress surrounding gifts so families can spend more quality time together – joyfully.

Trusted by over a million members, Giftster helps families connect around gift-giving occasions. They report less anxiety, less time and money wasted, and more satisfaction in giving gifts that are truly desired.