(Rochester, MN) — November 9th, 2022 — A newly published baseball book is the first full-length biography of Frank Grant, a Black player voted into the Hall of Fame in 2006, who is widely considered the best Black player of the 1800s.  Grant challenged baseball’s color barrier in the 1880s to play for several top professional teams that were otherwise all white—and two minor league teams in Pennsylvania even fought a courtroom battle for his services.

Frank Grant: The Life of a Black Baseball Pioneer documents his many career highlights, including successful games against many Major League teams during exhibitions and a solid batting average against Hall-of-Fame pitchers.  All told, Grant played against or with, or had some other sort of connection, to no fewer than 26 Hall-of-Famers.

Included are stories overlooked for more than a century, including a falsified anecdote that obscured one of Grant’s best games from history, with the Buffalo Bisons of the International League, one rung below the major leagues. The book also sheds new light on early years of the Cuban Giants, the first Black pro ballclub, which Grant led during much of the 1890s.

The book’s author, Richard Bogovich, may be the first researcher to have documented and brought to light a remarkable winning streak of the Bisons, in which Grant was the central figure.  He may also be the first baseball historian to report on a dangerous fight after a ballgame in Trenton, New Jersey, which he sums up as “Frank Grant, action hero.”

Bogovich similarly documents the early years of Grant’s only known son, who was unknown to baseball researchers until roughly a decade ago and whose first name was known to just a handful at most.  As a result of this genealogical research, Bogovich introduced Grant’s living descendants to those of his only sibling known to have children, brother Clarence.

The book wraps up by presenting two anecdotes seven and five years before his death, involving some prominent Black ballplayers, thus countering longstanding supposition that Grant was largely forgotten and possibly quite lonely during the final decade or two of his life. 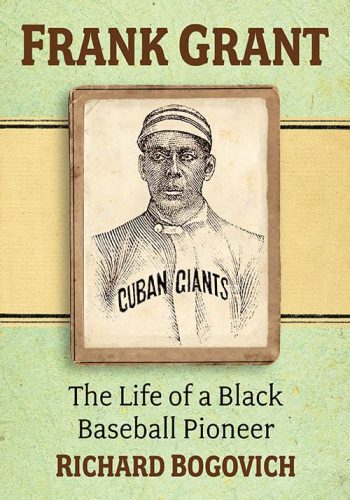 In 2012, Richard Bogovich wrote a biography on Hall-of-Fame pitcher Kid Nichols for the same publisher, McFarland & Co.  As a volunteer, Bogovich has written shorter biographies and chapters for numerous books produced by the Society for American Baseball Research (SABR), including several on the Negro Leagues from 1920 to 1948.

Bogovich is office manager for the Wendland Utz law firm in Rochester, Minnesota, where he has lived since 2011.  He is a Chicago native who earned degrees at Northern Illinois University before spending 25 years in Madison, Wisconsin.