Hastings now a 3-time recipient of the Penrose Award

(Mankato, Mn)  -April 6th, 2022- For leading Minnesota State University into the 2022 Frozen Four, Mike Hastings has once again been chosen as the recipient of the Spencer Penrose Award as Division I Men’s Ice Hockey CCM/AHCA Coach of the Year by his peers.

The honor is the third for Hastings, and his second consecutive selection. He joins only three other coaches who have won this award three times: Len Ceglarski, at both Clarkson and Boston College, Charlie Holt of New Hampshire and Jack Parker of Boston University.

The 2021-22 Mavericks bring a 37-5 record into Thursday’s semifinal game (7:30 p.m. CST) against the University of Minnesota as they look for their first national championship. It is the only missing piece on the Hastings resume.

It wasn’t easy to get to Boston. The Mavericks’ last three wins were nailbiters: 2-1 in OT over Bemidji State to capture the CCHA Tournament, 4-3 over Harvard to open the NCAA Regionals in Albany, and finally a 1-0 thriller over Notre Dame to reach the Frozen Four.

In less than a decade, Hastings has propelled the MSU program into a conference and national power. The Mavericks have played in seven NCAA tournaments, reaching the heights of the Frozen Four in 2021 and 2022. And the MacNaughton Cup has practically found a permanent home in the team’s downtown Mankato facility over that span. It should come as no surprise. After all, Hastings has never experienced a losing season as a head coach at any level.

Hastings and his Minnesota State teams have won more games over the last 10 years than any other program in the country. Over that time, the Mavericks have racked up a record of 273-94-24 for a national-best .727 winning percentage. Inheriting a program that reached 20 victories just twice in its first 16 seasons as a Division I program, Hastings truly changed the culture at Minnesota State and turned the Mavericks into a consistent winner. Not only have his Mavericks won no fewer than 21 games in any of his 10 seasons, but they hit the 30-victory plateau three times, including this year where they’ve won a school-record 37 games.

The fourth coach in the history of the Maverick men’s hockey program, Hastings arrived at Minnesota State following a three-year stint as the associate head coach at Nebraska-Omaha. He also served as an assistant coach with the men’s hockey program at the University of Minnesota for one season and before that had a 14-year run as head coach of Omaha of the United States Hockey League. He left the USHL as the league’s all-time winningest coach, compiling a 529-210-56 record with the Lancers, never had a losing season and led Omaha to three Clark Cup titles as the USHL’s play-off champions. He was named USHL Coach of the Year three times and as the team’s general manager, earned league GM of the Year honors five times.

Assisting Hastings this season were Todd Knott and Paul Kirtland. The runner-up for this year’s Spencer Penrose Award was Bob Motzko of the University of Minnesota. 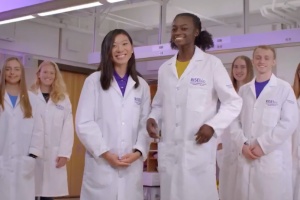