In the midst of the Ukraine crisis, the pandemic, school shootings, and bad news in 2022, the Minneapolis-St. Paul artist is bringing beauty to the world.

“The message is too relevant given the state of the world right now. People need to hear this.”

As a response to the brokenness in the world and within himself, independent artist Reverse Mechanic has embarked on an ambitious endeavor to bring hope and healing to the world. In an album titled “Broken Down,” he wrestles with all the ugliness that so often taints our humanity, and finds in the end that beauty has the final word.

“I started this project in 2020, and it seems more pressing now than ever before,” Joe Wistrcill of Reverse Mechanic explains. “The concept came while living in Minneapolis during the riots after George Floyd’s murder. It really felt like the world was breaking down,” Wistrcill continues. “I was still recovering from surgery after a major car crash, dealing with my dad’s recent death, and pondering broken personal relationships, and I realized that it was not only the world that seemed broken, it was me. It almost seemed ironic that my tag line was ‘breaking it down.’ I realized I had to take to the studio and sift through it all. I, along with the album, found healing and hope in the end.”

The release date for the fourth major single on the Broken Down record, “Stained Glass,” has been moved up to June 24th, because according to Wistrcill, the message is too relevant given the state of the world right now. People need to hear this. As the lyrics in the new song declare:
“You don’t get fixed up
if you ain’t broken down.
You don’t yell for help
if you ain’t ‘bout to drown.”

It certainly seems that we are broken down. But as Wistrcill reminds us, in the face of such challenging times, we have an opportunity to do something remarkably beautiful. “All our stained and broken pieces fill church windows. And they are gorgeous when that light’s shining through.” – Reverse Mechanic (Stained Glass).

With more singles scheduled for release every month this year, Reverse Mechanic promises that the Broken Down journey is only getting started. Stained Glass signals to the whole world that ‘this is the year that the peace comes back. Let us build them up when the people crack.’ 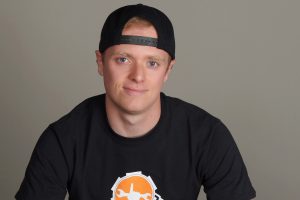