HipStar® will be successful because it solves basic problems that millions of travelers, hikers, and adventure seekers face” — Igor Koshutin, CEO and Founder

(Minneapolis, Mn)  — April 8, 2022 — HipStar is developing a new travel cart designed to handle challenging terrain and reduce carrying weight by over 90% while hiking and traveling. This new cart, called HipStar®, was designed to overcome the weaknesses of traditional wheeled luggage carts, which must be rolled across smooth surfaces for the wheels to function properly. In contrast, HipStar® features large wheels that are built to roll smoothly over uneven ground, completely hands-free, making it suitable for long treks in the outdoors. Designed with an active lifestyle in mind, the HipStar® allows users to travel longer without sacrificing any important gear. The cart is collapsible, allowing hikers to use it as a cart or to fold it up and wear it like a standard backpack while climbing, crossing rivers, or traversing over large rocks. It can be used as a bike trailer as well.

Speaking of gear, one of the most innovative features of HipStar® reduces a typical hiker’s 30-40 pounds of gear to about 2.5-3.5 pounds of perceived weight while towing the cart. The freedom to move the weight off your back and attach it to the user via a belt harness means that you can break into a run and have the cart follow you – all while preserving the “anti-gravity” effect that makes your gear feel practically weightless.

Another distinctive feature is a lack of disturbing inertial “push-and-pulls” generated by the hiker when walking due to a combination of the harness’s design and the shock absorbers, allowing for smooth movement, or even running, for long-distance.

HipStar launched the Indiegogo crowdfunding campaign and exceeded the goal by 200%. The funds raised will be used to finalize the product design, purchase initial inventory, branding, and marketing efforts. The very early backers will receive an exclusive discount as soon as the product is released to the public.

“No matter where and how you travel, even a light backpack begins to weigh as much as a few bricks. You get tired. You get impatient. You waste half your day dealing with back pain. All because there’s no other way to carry your stuff other than on your back. What about seniors or people with back problems? They are even more affected by carrying weight around. It doesn’t matter if it’s light or heavy.

That’s when the idea for the HipStar® was born: a back-free, hands-free light, collapsible travel cart that makes it easy to move heavy items over any terrain with little effort, literally doing the heavy lifting for you, and can be used as a backpack or even a bike trailer if needed!

“We are convinced that the HipStar® will be successful because it solves basic problems that millions of travelers, hikers, and adventure seekers face. The fundraising campaign is aimed to make HipStar available to millions of people who are looking for a versatile and effective companion while they are on the go”.  – Igor Koshutin, CEO and founder.

“The most versatile and effective hiking trailer! Everything seems to have been included in the design – multiple adjustments, shock-absorbing, running, walking, or resting flexibility – really impressive!”  – John Pernu, Australia 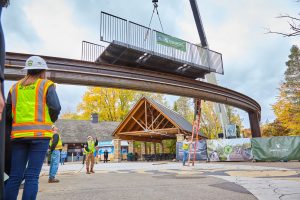