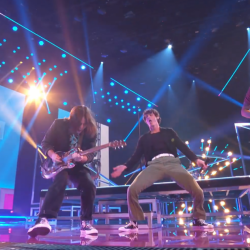 (Minnesota) – March 21st, 2022  —   It’s finally time for America to choose the next great songwriter(s). American Song Contest premieres live on NBC tonight, March 21, kicking off an epic Eurovision-inspired competition between the 56 United States and territories. However, only one state can emerge victorious in the end, and it’s up to viewers to decide which one. Here’s how to vote for your favorite artists on American Song