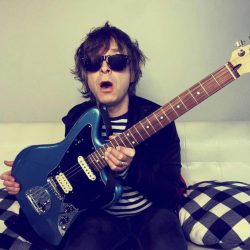 (St Paul, MN) —  September 26, 2022 — MUSIC-NEWS.COM | Ryan Smith ‘I’m Slipping’ video premiere   Ryan Smith might be best known as the frontman of The Melismatics and Ryan And Pony, as well as the lead guitarist of Soul Asylum. But before all of that, Ryan was making solo recordings in which he played all instruments as a teenager and releasing albums on his own Hygh Tensions Records.