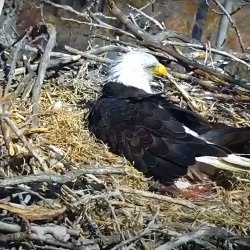 The Eagle Cam Update is good news.   Things are progressing on schedule for the two chicks. Hatch update – chick number 2 has hatched! Right on time, the two chicks have hatched! The first chick hatched on Tuesday, March 22. Tuesday was one of the wettest days we’ve had at the cam site, but that didn’t stop the chick from emerging from the egg. Because of the cold, windy and